January 15th 2015 will go down as another historical day in the financial markets. An event triggered by a national bank action caused a tsunami in the forex market. In a matter of seconds Swiss Franc soared as much as 41% against Euro; also impacting other correlated markets to varying degrees. Take a look at this ‘Daily’ (USD-CHF) chart to get an idea of the scale of volatility: 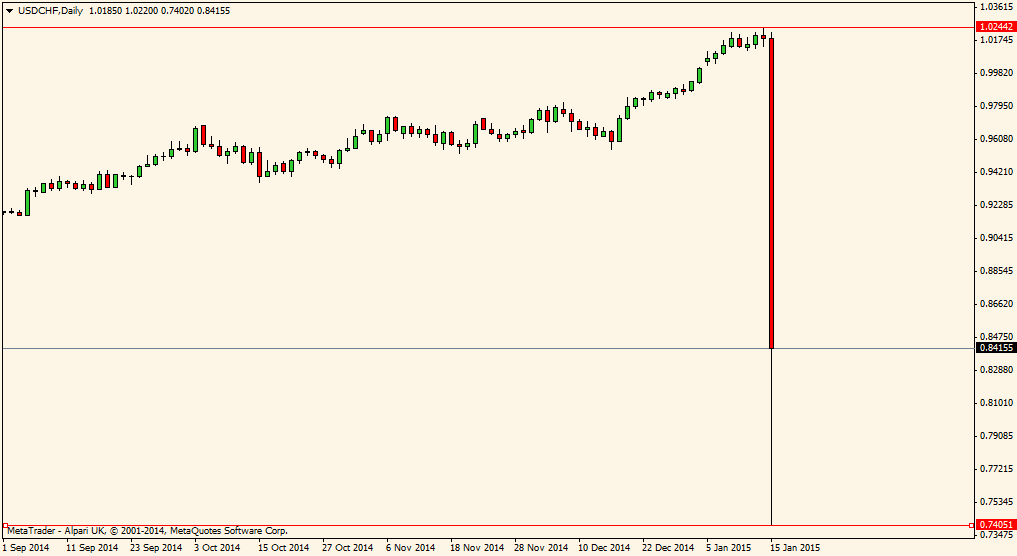 Later in the day a number of news articles on the impact it caused started flowing in:

But with the ongoing economic problems in Europe not showing any signs of disappearing anytime soon, the pressure was getting more intense. With Grexit becoming a real possibility once again,  a reported deflation in Euro zone earlier this month and signs of another imminent round of quantitative easing from Eurepoean Central Bank (ECB) meant it was becoming harder and harder for SNB to protect this self imposed floor.

Some traders who were in a long Swissy trade when this happened would have made money, some of them a lot of it! But as we all know gains are often limited by the profit taking limit orders; but stop losses are often skipped in such a sudden move. My guess is the losses to individual traders are far more than the gains made by winners. What surprised me was the extent of damage some of these brokers allowed to happen to themselves. Did they not hedge their exposures properly? Did they have speculative positions themselves assuming SNB to protect that floor come what may? Were they far too liberal with the leverage they offered?

Quite a few blamed SNB for the sudden action calling it a callous and irresponsible behaviour. As if SNB had a responsibility for managing their risk. In my view the most fundamental mistake by SNB was made in September 2011 when they pegged their currency at a certain level and pledged to maintain the floor. That action was against the natural market dynamics.

The lesson for everyone is never to take risk management for granted. Even a national bank with virtually ‘unlimited’ capacity to print money cannot stand up to the natural market forces when tide turns against.

I actively trade the USD-CHF pair but was lucky not to be on the wrong side of this event. For those who were on the winning side, enjoy the win, but spare a thought for those who lost more than they had planned for due to slippage on their stop loss orders. My sympathy for all those disciplined traders who did nothing wrong but still lost big time anyway. Remember anything can happen in the markets – the only thing predictable about the markets is that they are always unpredictable.

Hope this is useful for your trading. If you have any questions or would like to discuss this or any other trading subject, please send me an email at [email protected]

This site uses Akismet to reduce spam. Learn how your comment data is processed.